Once upon a time, there was a village
A village hidden by a wood covered with cobwebs
A village where all of the children have disappeared -
All, that is, except Blu...

A brand new production for 2021 created by the team behind Brighton's A Christmas Carol at The Spire.

Join Blu, as together we adventure through the tangled woods for a new spin on old tales. Along the way, you will bump into characters from some of the world's best loved stories reimagined for the next generation - Blu & the Magic Web is a fairytale mash-up featuring Red Riding Hood, Sleeping Beauty, Hansel & Gretel, Rapunzel and some brand new characters to add to your storybooks.

Can you help unravel the Magic Web this Christmas?

Truestory Theatre are known for their strikingly visual style and physical feats – this creative team have been wowing audiences for five years with their shows at The Spire (including the long running A Christmas Carol, selling out every season since 2015). This world premiere show for ACCA comes with full-scale production – expect mesmerising sets & costumes that leap from the stage together with original music, comedy and drama – all told by a cast of nine professional actors.

Join us for what promises to be a feel-good spectacular for all the family. 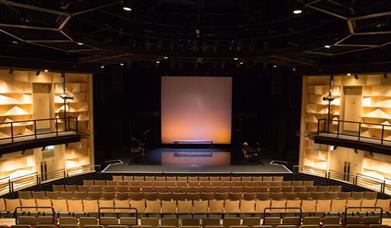