You are here: What's On > The West Pier -- A Celebration in Poetry & Art

The West Pier -- A Celebration in Poetry & Art

The iconic West Pier of Brighton to be honoured with an evening of poetry and exhibition by some of Britain’s leading creatives.

The launch event at the i360 on the evening of 18th August will also include poetry readings by Geraint Jones and Oliver James Lomax, each with new poetic responses to the theme of the West Pier.

The paintings by Dan, on show at the event, will then be exhibited at the West Pier Centre on the seafront until 2nd October.

Sales from the paintings will help benefit the Trust’s ongoing ambition to honour the memory of the West Pier and its future vision.

The artist Dan Llywelyn Hall said: “I’ve long harboured an ambition to make a series inspired by the West Pier. This stranded skeleton of a Victorian ‘golden age’ stands indomitably. I’m fascinated by how people engage with it…Yoga groupies, party-goers, sunbathers and hordes of starlings find this backdrop irresistible.
These paintings hint at the glories of the ghost pier and glimpses of the past activities ’”

Hugo Willams said of his poem and his time in Brighton…
The poem’s opening draws on his personal memories of it. “The Pier was in its pomp when I was growing up, no doubt about that,” he says. “I remember the track that you could drive cars around, and the slot machines. I remember one had a picture of Buffalo Bill.”

The more contemporary second half has a darker tone. “I’m very aware that it is mostly romantic rather than first-hand,” he says. “It wasn’t part of my life when it was on the downward slope in modern times, more when my nanny would take me there for a walk with my kid brother, or when I was dating people and going for weekends. With a poem, colour and aesthetics come before everything else.”

The poem ends on a striking yet humorous image. “It took a while to get that,” he says. “The difficulty is not being portentous and talking about eternity, but to find that almost casual feeling. You have to do what Fred Astaire said – if it looks difficult, you’re not working hard enough.” 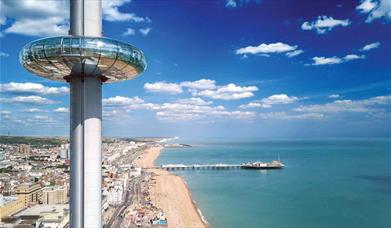 British Airways i360, Brighton and HoveGlide up slowly to 450ft to enjoy breathtaking 360° views in our futuristic glass viewing pod, conceived and designed by Marks Barfield Architects, creators of the London Eye.