You are here: Things to Do > The Ceramic House 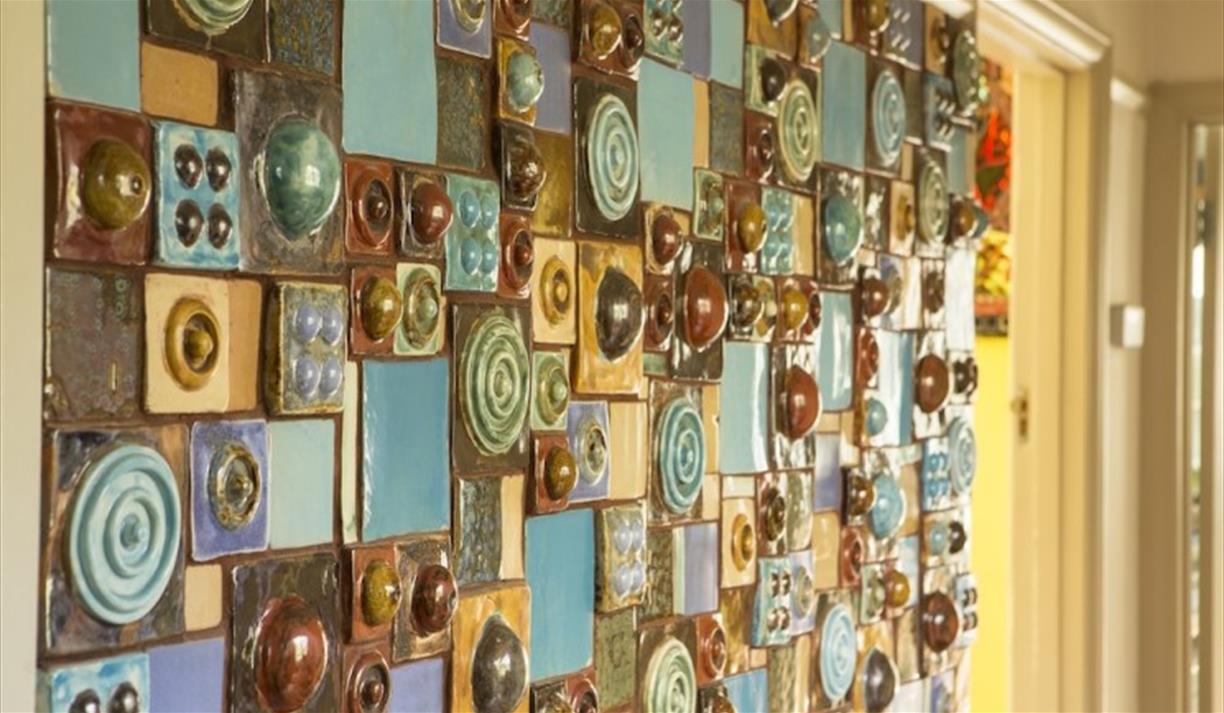 THE CERAMIC HOUSE is the creation of architectural ceramicist Kay Aplin, who has transformed her home into a living work of art and created a permanent showcase of her ceramic installations.

It is also a pop-up gallery, an artists residency, a unique guesthouse and a project space investigating the intersections between ceramic and sound art practice.

We aim to bring artists together from different countries to explore new ways of combining craft and digital art. Our approach is artist-led and driven by the collaborative artistic practice of Kay and her co-curator Joseph Young.

The Ceramic House first opened to the public in May 2011. Kay moved to Brighton in 2008 and upon discovering Artists Open Houses, decided to turn her house into a showcase of her architectural ceramics practice as she states, “As a public artist, most people can only ever view my site-specific work in photographic form, as it tends to be sited in faraway places. I wanted to create a context in which visitors could see and touch my tactile work and The Ceramic House came into being.”

The first exhibitions were well received and in 2013 it was voted Best Artists Open House. In 2014, the first themed project took place, an exchange with Denmark which involved an exhibition of Danish ceramics at The Ceramic House and a residency at Guldagergaard and exhibition of Kay’s work at European Ceramic Context in Denmark. In 2015, Dark Light, an exhibition of black and white ceramics brought ten ceramists together from five continents.

In 2016, Kay joined forces with sound artist Joseph Young to develop an ongoing collaboration working across the media of sound art and ceramic practice. Their first joint project was Landscape : Islands and involved their own residency and exhibition at Shetland Museum and Archives, a touring exhibition to Guildhall, Rochester and DAAD, a concert series at The Ceramic House, the first album release and an international residency exhibition at Brighton Digital Festival.

In 2016 a new ‘white cube’ project space, In Camera Gallery, opened, in a separate building in the garden, offering a neutral space for installations and providing a space for events.

The same year, the first artists-in-residence programme was hosted by The Ceramic House for ceramic artists collaborating with sound artists.

Made in Korea in 2017 was the first time an exhibition at The Ceramic House toured to a commercial gallery, Sladmore Contemporary in Mayfair. Two Korean ceramic artists-in-residence created work for British Ceramics Biennial, which was exhibited together with Kay Aplin’s Pavilion, with Joseph Young’s sound work linking the two installations together. Sounds artists from Korea and the UK contributed to Celdadonaphonic, a geo-located sound trail in Stoke on Trent. Kay and Joseph had an exhibition at Mullae Arts Factory in Seoul, Korea, where Joseph performed for Mullae International Sound Art Festival and the Celdadonaphonic trail was permanently installed.

In 2021, our tenth anniversary fittingly coincided with the most ambitious Ceramic House project to date. Interbeing was originally designed to be very different from its eventual form, taking place entirely during the pandemic, as no international travel between China and the UK was possible and several partners dropped out due to Covid related issues. However, new partners were found and elements were changed to accommodate the situation. An exhibition of Chinese ceramics was followed by a virtual residency for Hong Kong ceramic artists collaborating with UK sound artists to create work for Quex House in response to the colonial-era collection in the Powell Cotton Museum. A virtual exhibition paired Chinese artists with objects from the Buddhist collection at Chiddingstone Castle. Joseph Young collaborated with a filmmaker and a Tai Chi Master to create a film which was presented at London Chinese Community Centre and Park 19 in Guangzhou. Kay’s Ceramic Wallpaper: Peonies installation became part of the book which concludes the project, Perfection of Understanding, also the name of the album comprising of works by Chinese sound artists.

Edges is our forthcoming project, a collaboration between artists from Ireland, Estonia and the UK. Starting in April 2022 with a residency for Estonian and Irish artists at The Ceramic House, the results will be exhibited alongside an exhibition of Irish ceramics in May 2023.

The Ceramic House usually opens to the public in May each year as part of Artists Open Houses during the Brighton Festival.

Kay’s studio is at Phoenix Artspace where the studios are located for Ceramic House residencies. Visits to The Ceramic House or studio are available by appointment.