You are here: Home > Things To Do > BRIGHTON BIER

VISITBRIGHTON DISCOUNT ON CASES OF BIER!

If you love beer and want to drink local ales then you have to try Brighton Bier, the city’s international award-winning brewer and Brighton’s original craft brewery.

To get your 10% VisitBrighton discount on any case of Brighton Bier, visit their webshop and use code LOVEBIER at the checkout. Brighton Bier provide city wide delivery in partnership with zero-emissions courier Zedify, as well as nationwide delivery, so a taste of Brighton is never far away!

For the best choice go to one of their 3 pubs in the city:

Brighton Bierhaus their tap room in the centre of town, close to Brighton Pavilion and the Palace Pier. (161 Edward Street, BN2 0JB)

Freehaus a short walk from the Level and Laines with a wonderful heated garden and fabulous line up of beers. (1 Howard Road, BN2 9TP)

Haus on the Hill in the heart of Hanover, this is a fabulous pub with a great welcome, incredible roast dinners and tremendous Caribbean food throughout the week.

Since starting in 2012 the brewery has enjoyed rapid growth, is exported across Europe and as local British Beer Writer of the Year, Emma Inch, said...‘Brighton Bier is a brewery that's truly rooted in its local community. It captures the city's creativity in its beers, and gives a proper seaside welcome in each of its friendly pubs. This brewery has Brighton running through it like the proverbial stick of rock.’

As well as their pubs being award winning and featured in the Great British Pub Guide, the brewery as won over 15 International Awards for their beers including at the World Beer Awards, International Brewing Awards and the International Beer Cup in Japan.

The beers have won a number of international awards over the past couple of years, including:

As well as finding their beers across the city, Brighton Bier is now exported to Europe and Asia. 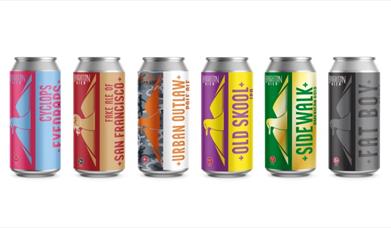